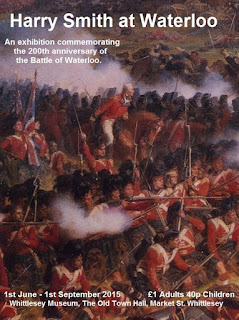 Did you know that local celebrity Sir Harry Smith fought at the Battle of Waterloo during the early part of his career, or that his young wife Juana was told that he had died there and rode 60 miles over the battlefield searching for his body before the pair were reunited?

This summer's exhibition at Whittlesey Museum commemorates the 200th anniversary of the Battle of Waterloo on 18th June using first-hand accounts of the battle written by Sir Harry Smith and Juana Smith. Come and find out for yourself about the role that the Prussian army played on the day, the looting of teeth from the dying to use in dentistry at home and Europe's first prisoner of war camp at Norman Cross in Peterborough.
Posted by Whittlesey Museum at Sunday, May 31, 2015